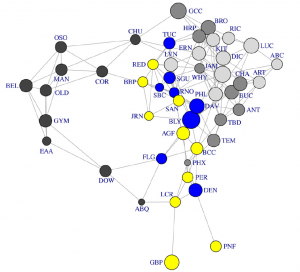 Urban hubs of connectivity: contrasting patterns of gene flow within and among cities in the western black widow spider

As urbanization drastically alters the natural landscape and generates novel habitats within cities, the potential for changes to gene flow for urban-dwelling species increases. The western black widow spider (Latrodectus hesperus) is a medically relevant urban adapter pest species, for which we have previously identified population genetic signatures consistent with urbanization facilitating gene flow, likely due to human-mediated transport. Here, in an analysis of 1.9 million genome-wide SNPs, we contrast broad-scale geographical analyses of 10 urban and 11 non-urban locales with fine-scale within-city analyses including 30 urban locales across the western USA. These hierarchical datasets enable us to test hypotheses of how urbanization impacts multiple urban cities and their genetic connectivity at different spatial scales. Coupled fine-scale and broad-scale analyses reveal contrasting patterns of high and low genetic differentiation among locales within cities as a result of low and high genetic connectivity, respectively, of these cities to the overall population network. We discuss these results as they challenge the use of cities as replicates of urban eco-evolution, and have implications for conservation and human health in a rapidly growing urban habitat.