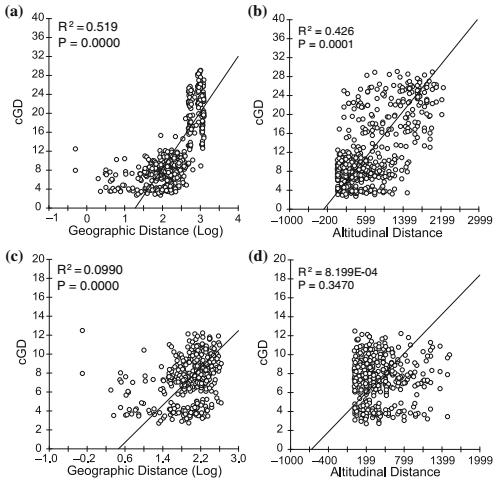 Habitat fragmentation and landscape topology may influence the genetic structure and connectivity between natural populations. Six microsatellite loci were used to infer the population structure of 35 populations (N = 788) of the alpine Arabian burnet moth Reissita simonyi (Lepidoptera, Zygaenidae) in Yemen and Oman. Due to the patchy distribution of larval food plants, R. simonyi is not continuously distributed throughout the studied area and the two recognized subspecies of this endemic species (Reissita s. simonyi/R. s. yemenicola) are apparently discretely distributed. All microsatellites showed prevalence of null alleles and therefore a thorough investigation of the impact of null alleles on different population genetic parameters (F-ST, inbreeding coefficients, and Population Graph topologies) is given. In general, null alleles reduced genetic covariance and independence of allele frequencies resulting in a more connected genetic topology in Population Graphs and an overestimation of pairwise F-ST values and inbreeding coefficients. Despite the presence of null alleles, Population Graphs also showed a much higher genetic connectivity within subspecies (and lower genetic differentiation (via F-ST)) than between; supporting existing taxonomic distinction. Partial Mantel tests showed that both geographical distance and altitude were highly correlated with the observed distribution of genetic structure within R. simonyi. In conclusion, we identified geographical and altitudinal distances in R. simonyi as well as an intervening desert area to be the main factors for spatial genetic structure in this species and show that the taxonomic division into two subspecies is confirmed by genetic analysis.